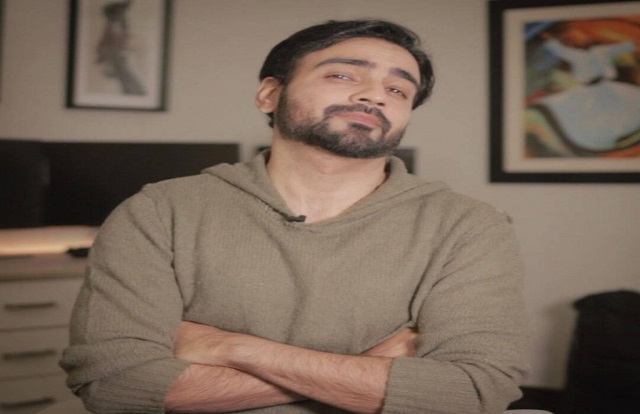 Who Is Arslan Naseer?

Arslan Naseer is a rising Pakistani actor who instantly made his place in the Pakistan drama industry. He comes from an army background, and no one in his family is related to the showbiz industry.

Before acting, Arslan was famed for his Youtube comedy channel CBA (Comics by Arslan). Also, he has been a content creator and wrote scripts for cartoons like “Burka Avengers.” Later, he decided to try his luck in acting, which was the best decision.

Arslan was born and raised in Islamabad. However, he spent his childhood moving around different cities in Pakistan due to his Father’s postings. Since his early life, he has been a humorous and productive guy. In fact, he turned his passion into a career.

He is 5 feet 8 inches (around 173 cm) tall. His height is just perfect for being an actor.

Moreover, Arslan shared that he pays enough attention to his weight. He also has a dedicated gym corner in his home. His current weight is 70 kg (154 pounds) which falls in healthy BMI.

Presently, Arslan has multiple sources of income. He earned a fortune from his previous job in the business administration sector of the UK. Moreover, his Youtube channel, CBA, generates around $50k anually. He is making money from acting, while a significant portion of his income comes from his job in a Telecom Company.

Arslan got her early education from a military school. Later, he moved to Ireland and earned a bachelor’s degree in business administration. He went to England to further pursue his Master’s education.

If we talk about the actor’s family, he has not disclosed much about his family to the media. As per our information, he has a military background and lives a lavish life.

Arslan is relatively junior in the acting field. He appeared only in two dramas. His debut drama was Ramzan special rom-com Chupke Chupke in 2021, where he played the role of Hadi against Aymen Saleem.

After that, he was cast in the next year’s Ramzan special serial Paristan in 2022. Moreover, he did a telefilm Hona Tha Pyar (2021), opposite Sanam Jung.

Well, he has not introduced his parents to the media yet. We will update you as soon as we know more about his parents.

In an interview, Arslan said he was in a relationship several years ago. However, that relationship didn’t make out. Currently, he is unmarried.

Recently, rumours were circulating about Arsaln and Aymen Saleem’s relationship; however, they have denied them.

Q: Are Aymen Saleem and Arslan in Relationship?

Recently, rumours are hiking about Aymen and Arslan’s secret relationship. People assumed that they were dating together. However, the actors have declined the false news.

Q: What Is Arslan Naseer Net Worth?

The net worth from all his income sources is estimated to be $113.29k.

Q: What is Arslan CBA qualification?

He earned a BBA degree from a reputed institute in Ireland. Later, he completed his MBA degree in the UK.