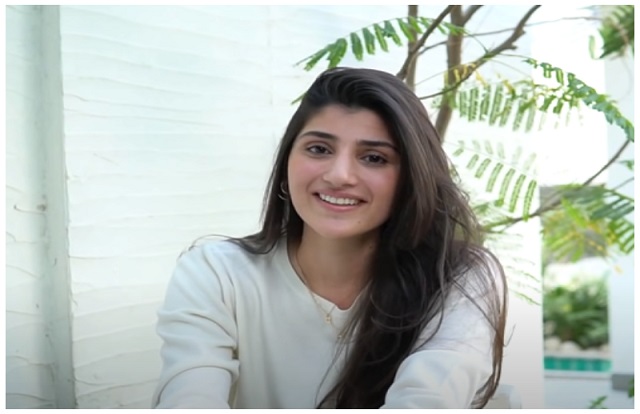 Who is Maheen Siddiqui?

Maheen Siddiqui is the rising star in Pakistani showbiz industry. Her debut drama “Dobara” in which she is playing the role of “Minaal.” The drama serial Dobara casted by Pakistani famous channel “Hum TV,” is the actual cause of her fame.

Besides, Maheen is a talented graphic designer who was designing Azaan Sami Khan‘s music video “Main Tera.” Eventually, she was casted by the director in “Main Tera” video. In fact, she is also in touch with the media and keep sharing her moments which gave her instant fame on social media.

She was born in Ireland and spent her ten years there. Later on, she moved to the Saudi Arabia and ended up settling in Bahrain. In fact, Maheen finished her high school in Bahrain. Then she went to Toronto for University where she also some jobs as a student. After all, she wanted to come back to Pakistan and flourish in her career.

Although Mheen has not opened up about her birth year, we will soon update out her age.

Maheen is 5 feet 5 inches ( 165 cm ) tall and inherited her height from her paternal family.

Like other young girls, Maheen has maintained her weight very well. She weighs 49kg ( 108 lbs ) at present.

She told Haute that she has been earning since her University. Also, she is an experienced graphic designer and actress. However, she has not talked about her net worth.

Maheen completed her High School in Bahrain. Then she moved to Toronto for higher studies. Maheen did various part-time jobs during her academic career.

According to her interview, she has one sister and two younger brothers. However, she has not shared anything about her parents.

Before coming into the showbiz industry, she made a music video with Azaan Sami Khan. Her modeling debut video was the song  “Main Tera” with Azaan Sami Khan. After that, she was assigned her first ever mini-screen project, Dobara. Right after her debut, she was taken in GEO TV drama Mere Humnasheen with Shahzad Sheikh and Hiba Bukhari.

Once Maheen shared her mother’s picture on social media. Nevertheless, no other information is known about her father and mother.

Maheen is getting popular day by day because she is in touch with the media and keeps sharing her moments. She has about 25.1 k followers on Instagram.

Maheen is an attractive actress, but fortunately, she is not married yet. She is still single and enjoying her bachelor’s life.

Q: What is the age of Mheen Siddiqui?

Maheen ha not shared her exact age. All we know is about her birday is 19 March.

Q: Who is Maheen Siddiqui’s husband?

Maheen is unmarried at the present time.

Q: What is Maheen Siddiqui’s height and weight?