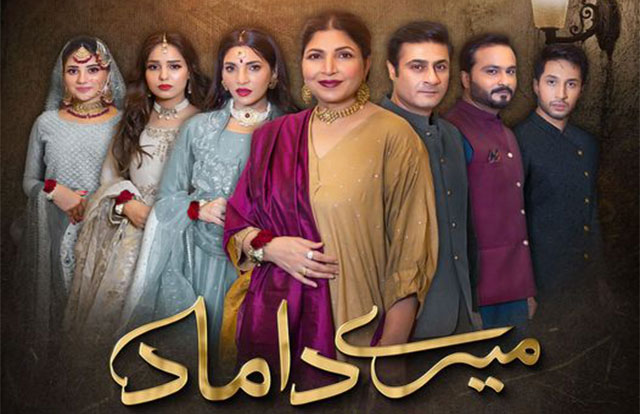 Hum TV is coming up with a new drama serial, Mere Damad, that will air on your screens from December 8, 2022. The Mere Damad drama serial storyline portrays the life of a female lawyer who takes advantage of her authority. However, she will pay for her notorious acts later in life. Shagufta Ejaz, Noor Zafar Khan, and Farhan Malhi are the lead cast of the Mere Damad drama. Other supporting actors include Zhalay Sarhadi, Humayun Ashraf, Kamran Jeelani, Paras Masroor, Daniyal Khan, Alizeh Zaid, and Suqaynah Khan.

Abdul Khaliq Khan is the writer of the Mere Damad drama story. On the other hand, Moomal Shunaid and Momina Duraid have collectively produced this project. At the same time, Nain Maniar artistically directed the shoot.

You can click here to watch online episodes of the drama serial Mere Damad.

The Mere Damad drama serial is a tale of a female lawyer Sajeela and her four daughters, Mahnoor, Sania, Wania, and Hania. Sajeela is a corrupt lawyer and accepts a bribe in return for blaming an innocent. The accused man will do suicide right there. Later in the drama, it will be shown that years have passed, but that dead man story still haunts her.

Moreover, when she marries her daughters, they will face severe hardships in their life. Sajeela will know that her daughters now pay the debt of her evil deeds. Mere Damad drama is a presentation of “As you sow, so shall you reap.”

Noor Zafar Khan is a Pakistani TV actress who debuted her acting career in the drama serial Kaise Huaye Benaam. She started by modeling and also appeared in a few commercials for TV. Noor was last seen in Hum TV’s mystery drama Chalawa, where he played Sawera.

Khan was born on August 8, 1995, in Medina, Saudi Arabia. His father was from Pakistan, and his mother was from Lebanon. She was born in Medina and lived there until she was seven when her family moved to Pakistan. Noor Zafar Khan is the younger sister of well-known Pakistani actress Sarah Khan. The pretty actress is single at present.

Early in his career, Farhan Ahmad Malhi was a VJ on Style360 and later transitioned into the modeling industry. His first role was as the lead character Ajju in the 2015 drama Kaisay Tum Se Kahoon. Tumhari Natasha, Shehrnaz, and Kathputli were just a few popular dramas in which he starred. The dramas Rani Nokrani, Maamta, Tere Lie, Shiza, Faltu Larki, and Rashk all featured him in supporting roles. Since then, he’s been in the plays Hiddat, Kaisa Hai Naseeban, Laikin, Uraan, Banno, and Mohabbat Chor Di Maine.

In the Mere Damad drama story, Farhan portrays the role of Aliyan opposite Noor Zafar Khan.

Shagufta Ejaz is an actor, model, and entertainer in the Urdu cinema and television industry. In the 1990s, she was a regular on PTV Home’s beloved drama series. She is widely regarded as one of Pakistan’s top actors and has a few appearances in Punjabi films.

In the Mere Damad drama story, Shagufta Ejaz plays the lead role of Sajeela, a lawyer.