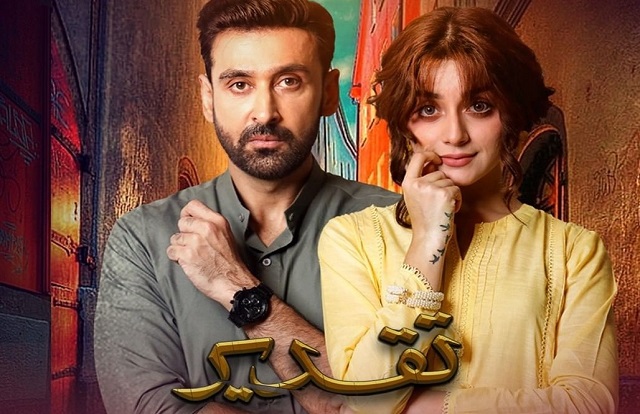 Doorway Entertainment writes the Taqdeer drama story. On the other hand, Dr. Ali Kazmi and Fahad Mustafa have produced the drama serial Taqdeer under the banner of Big Bang Entertainment. At the same time, Mohsin Talat directed the drama.

Taqdeer is a story about love, heartbreak, and the challenges a woman must overcome after marriage. The teaser goes into further detail about the tale of a young, spoiled girl who is constantly pampered by her family and is the apple of their eyes. Later, a boy proposes to her, and she falls in love with that guy after some time.

Both families will agree on their marriage. Eventually, the girl settles in a household where she is treated subserviently and is overworked with domestic tasks.

The lead female role is performed by Alizeh Shah, whereas Sami Khan will be seen in the lead male role.

Sami Khan, whose real name is Mansoor Aslam Khan Niazi, is a well-known Pakistani actor and model. Salakhain was his first film role, and he eventually transitioned to television. Even though he attended Divisional Public School and graduated from UET with a degree in Electronics and Communication Engineering in 2003, he decided not to pursue a career in that field since he was cast in a movie. Instead, he worked as an actor.

In the Taqdeer drama story, Sami portrays the lead role of a man who falls in love with a girl. Once they get married, he will not care about her feelings anymore.

Pakistani-born Alizeh Shah is an Urdu television and film actor. Acting-wise, she first appeared in Choti Si Zindagi in 2016 in the supporting role of Alina. Shah began her professional acting career in 2017, but she made her television debut at the age of six in a commercial in which she co-starred with Wasim Akram. She debuted in Tere Naal Love Ho Gaya for a few episodes before landing the role of Alina on Hum TV’s Choti Si Zindagi. Alizeh was highly praised for her acting skills in Ehd-e-Wafa and Taana Baana. Recently, she was part of the popular drama serial Bebasi.

In the Taqdeer drama story, Alizeh depicts the role of a young girl who belongs to an elite family. She is the apple of the eye in her family. However, she will pass through hard times after her love marriage.