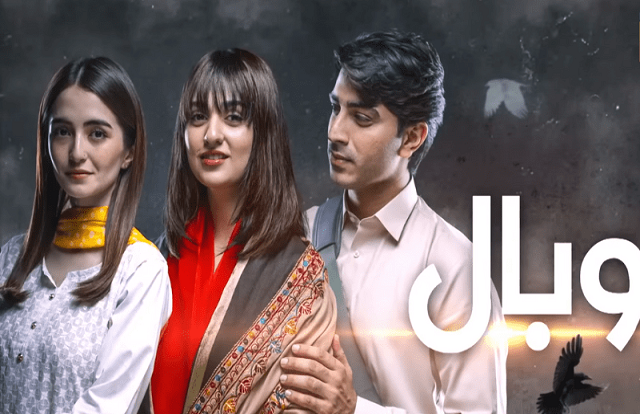 The drama serial Wabaal will be on screen from 3 September 2022. Hum TV presents the Wabaal drama serial featuring Sarah Khan, Talha Chahour, and Merub Ali as the lead cast. Other cast includes Tara Mahmood, Saleem Sheikh, and Shagufta Ejaz. Here is all about the Wabaal drama story and form with their real names.

You can watch the drama serial Wabaal from 3 September 2022, Saturday at 8:00 pm. Click here to watch the Wabaal drama online episodes.

The drama serial Wabaal story is about struggle, poverty, lies, and three consequences. The tale revolves around three main characters, Anum, Faraz, and Maham. Anum and Maham are sisters and belong to a lower middle class. Anum always wants to be richer where she does not need to compromise on her wishes. Her life is a lie, and she tells her friends that she comes from an elite class.

On the other hand, Maham is an optimistic girl who keeps telling her sister about the worst consequences of her deeds. Faraz is in love with Anum. Nevertheless, Anum does not seem interested because he also hails from a lower middle class.

It would be exciting to see how Anum’s lies will expose, and she gets the reward for what she did.

Sarah Khan, aka Sarah Falak, is a Pakistani actress who has starred in several popular Urdu-language TV shows. She gained massive popularity from the drama serials Sabaat, Raqs-e-Bismil, and Laapata. She was recently seen in the Ramzan special series Hum Tum.

In the Wabaal drama story, Sarah portrays the role of Anum, a girl who wants to live a prosperous life.

Talha Chahour is already a household in the entertainment industry with recent successes. He did a great job in his first TV series Jo Bichar Gaye, which stars huge celebrities like Wahaj Ali and Maya Ali. He was also a part of the drama serial Farz and Jaan e Nisaar.

In the Wabaal drama story, Talha will be seen in the lead role of Faraz, a lower-middle-class boy who likes Anum.

In 2018, Merub Ali became involved in the fashion sector on Pakistani television after finishing college. She has a praisable eye for style and stunning beauty looks. She is quite present on social media, where she regularly updates her followers on the progress of her new venture. Her drama list includes Sinf-e-Aahan and Paristan.

Born on 23 January 1996, Merub turned 26 in 2022. She is currently engaged to the Pakistani singer and actor Asim Azhar.

In the Wabaal drama story, Merub has taken the role of Maham, an optimistic young girl who is grateful for what she has.