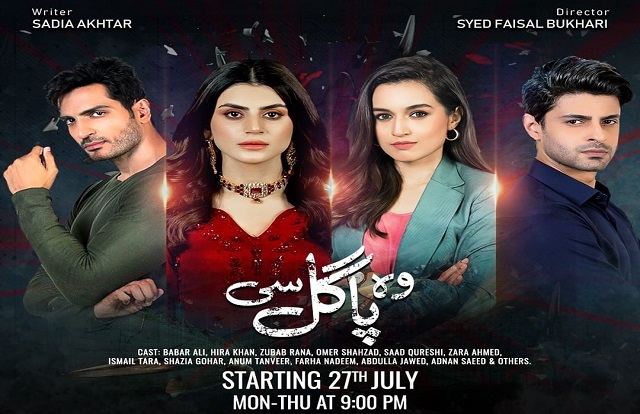 The drama serial Wo Pagal Si has created hype among viewers due to its unique storyline. Moreover, the drama serial will be aired on ARY Digital on July 27 2022. The drama Wo Pagal Si cast is full of star-studded actors, including Babar Ali, Zubab Rana, Omer Shahzad, Hira Khan, and Saad Qureshi.

Sadia Akhtar writes the story of the drama serial Wo Pagal Si. On the other hand, Syed Faisal Bukhari directed the shoot. At the same time, Six Sigma Plus produced this project.

The story of drama serial Wo Pagal is mainly involves four characters Shazma, Ahsan, Sarah, and Wahaaj. Ahsan Hayat is a successful business man and Sarah is her younger daughter. Shazma and Wahaaj are in relationship; however, Shazma will entrap Ahsan to take away with his money. To fulfill her dreams, she will marry Ahsan.

On the contrary, Ahsan’s marriage will affect his daughters’ life, and they will hate Shazma. Sarah is keen to reveal Shazma’s real face in front of hr after but she fails every time.

Lets see what surprises writer has left for us.

Zubab Fatima, known as Zubab Rana, is on the list of top Pakistani actresses and models. Moreover, she started her career in 2017 in a HUM TV drama serial Naseebon Jali. Later on, she was a part of popular projects like Rishtay Biktay Hain, Mehboob Apke Qadmon May, and Fitrat. Recently, she was seen in the drama serial Bharaas.

In the story of Wo Pagal Si, Zubab has taken the role of Shazma, negative protagonist of the serial. She will marry a rich person for the sake of his wealth.

Babar Ali is a Pakistani TV and film actor who kick started his career mere at the age of sixteen. He first appeared in the drama serial Shee Jee in 1994. His other popular dramas include Amanat, Benaam, and Weham. Bakhtawar is Babar’s most recent drama on air on HUM TV.

According to his birth date, Babar Ali is 46 years old. he is married and a proud father of three kids, 2 girls and a boy.

In Wo Pagal Si drama story, Babar portrays the character of Ahsan Hayat. Ahsan is a rich business man who will fall for a wrong woman at an old age.

Omer Shahzad is the top Pakistani male model who has proven his acting skills too. He debuted his career in 2013 in the drama serial Adhoori Aurat aired on GEO TV. Omer is known for his high TRP dramas including Bereham, Bharaas, and Gul-o-Guzlar. Also, he has collaborated with various national and international brands. His recent drama is Mere Humsafar which in currently on air on ARY Digital.

In the drama story of Wo Pagal Si, Omar is cast as Wahaaj, a negative character who will reinforce Shazma’s evil role.