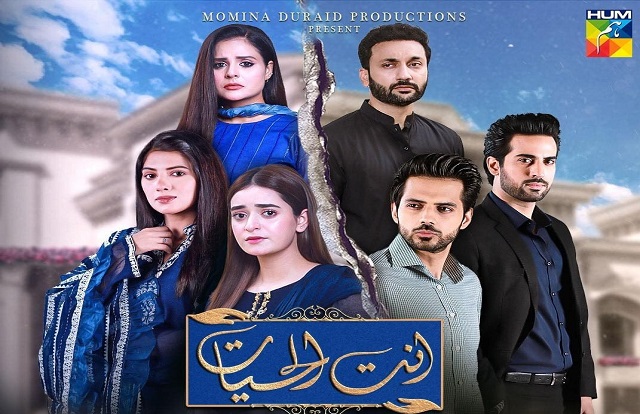 The drama serial Ant-ul-Hayat is now on air on HUM TV. This drama came up with the storyline that excited the audience. Hasan Khan, Minsa Malik, and Agha Talal will be seen in the lead roles of the Ant-ul-Hayat drama cast.

Athar Ansari writes the Ant-ul-Hayat drama story. On the contrary, this project is produced by Momina Duraid under the banner of Momina Duraid Productions. Meanwhile, Haseeb Ali directed the shoot of the drama Ant-Ul-Hayat.

The story is all about love, revenge, and betrayal. It highlights the harsh issues that a girl had to face after marriage. Ant-ul-Hayat drama cast has made it worth watching.

The storyline of Ant-ul-Hayat revolves around three sisters Tabassum, Samia, and Lubna. They are living a happy life and love each other. However, with the passage of time, they will realize that the life is way tougher than they thought. Samia and Lubna will be married to two brothers, Arsalan and Furqan. Later on, they will start to hate each other due to some misunderstandings.

Meanwhile, Samia will keep on trying to reconstruct her relation with her sister, Lubna.

Hasan Khan is a rising Pakistani actor. He debuted his TV drama career in 2014. In fact, he was a well-known theatre actor before entering the showbiz industry. Moreover, his appreciable works are Amrit Aur Maya, Hina Ki Khushboo, and Juda Huay Kuch Is Tarah. Recently, he performed in a popular drama serial Dil-e-Veeran, which is on air on ARY Digital.

According to his birth date, Hasan Khan is 29 years old. However, he is currently unmarried and not in any relationship.

In the story of the drama Ant-ul-Hayat, Hasan Khan portrays the role of Arsalan. Arsalan is heart broken and in search of true love. At the same time, his family will choose Samia as his life patner.

Minsa Malik is an emerging Pakistani actress. She started her career in 2017. Moreover, she played a minor role in her debut drama “Shahid.” After that, she got never-ending offers from the showbiz industry. Her notable work was in the drama serials Deedan, Nand, and Aulaad. Azmaish is Minsa’s recent drama that was aired on ARY Digital.

Born on 6th January 1998, Minsa turned 24 in 2022. Nevertheless, she is unmarried and enjoying her bachelor’s life.

IN the Ant-ul-Hayat drama story, Minsa has taken the role of Samia, a young, energetic, and lively girl.

The handsome lad, Agha Talal, is a Pakistani actor who started acting in 2017. In fact, “Yaqeen Ka Safar’ was his debut drama. After that, he appeared in the top hit dramas, including Mehboob Apke Qadmon Main and Badnaseeb. Recently Agha played a notable role in Ibn-e-Hawwa.

Agha is 28 years old and living a single life.

In the Ant-ul-Hayat drama story, Agha Talal will be seen in the character of Furqan. Furqan is a guy with good sense of humour and will be married to Samia’s sister.