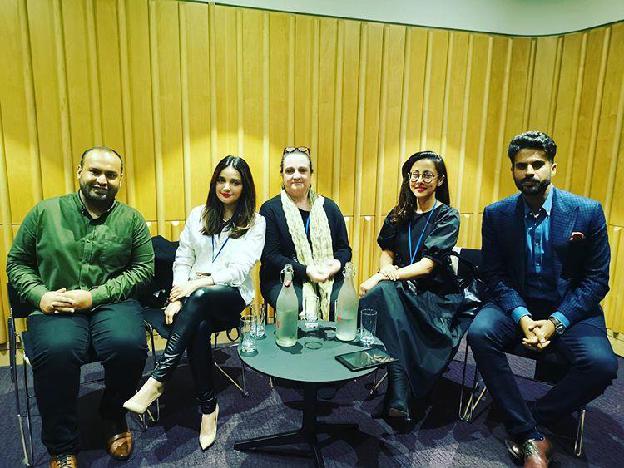 Recently, the fourth edition of Lahore Literary Festival was held in London at British Library. Diversified crowd having Pakistanis, South Asians, British and Europeans attended the panel discussions and conversations between writers, musicians and artists from Pakistan. The one day event had it all; arts, literature, culture, history and politics. Qawwals like The Saami Brothers were also a part of the event, hence summoned the festival with their performance.

Pakistan’s High Commissioner to UK, Nafeed Zakaria inaugurated the festival along with other prominent writers and artists. The founder and CEO of LLF, Razi Ahmed said, “The LLF is a platform for championing ideas and also, through the annual editions of the LLF in London and New York, for more cultural interactions between the East and West”. He also said that the goal behind the festival is to bring out Pakistan’s contemporary culture and literary thought.

The session ‘Go West: Pakistan’s Global Screen’, featured Pakistani actors Adnan Malik, Ainy Jaffri and Armeena Khan on a panel discussion about Pakistani drama/cinema and its outreach towards broader audience, the discussion was moderated by Fifi Haroon and also featured Haroon Rashid who’s a BB Entertainment reporter. The actors shared their views over how popular Pakistani films and movies are overseas, since majority South Asians can easily relate to the culture shown.

Ainy Jaffri said, “Pakistani dramas are being watched globally either through subscription based platforms like Netflix and Amazon Prime or through free forums like YouTube. Pakistanis and foreigners are getting to see what is indigenous to Pakistani culture. It also shows how talented Pakistanis are”. Adding to this all agreed that there has been a massive progress and change in the new age cinema because of young actors who are leaving a great impact by representing the cultural direction of the country.

Haroon Rashid said that the Pakistani dramas have a largely grown fan base in London and UK. This also changed when Bollywood introduced actors like Fawad Khan, Saba Qamar, Sajal Ali and Mahira Khan in movies, a huge amount of audience who were not aware of them get to explore a lot about them and saw their work. He also said that British Asians finds domestic violence shown in dramas relatable. Pakistanis who are living in London usually belong to the working class and they relate to all these problems shown in such dramas.

When the glorification of misery in dramas was discussed, Armeena said, “The people in charge believe that this is the only way to sell a product, but we are not ready to experiment yet. We have seen that most Pakistani films featuring a woman as a protagonist when fared well at the box office”. To add further Ainy said, “It’s alright to accept and portray that “we are a patriarchal society where gender norms are clearly pre-defined, however when we make dramas on such themes, we shouldn’t justify these practices but rather raise questions about them and provoke a discourse”.

Undoubtedly, this session had a lot to add to perspective and common mindset of people who have been a fan of Pakistani content.