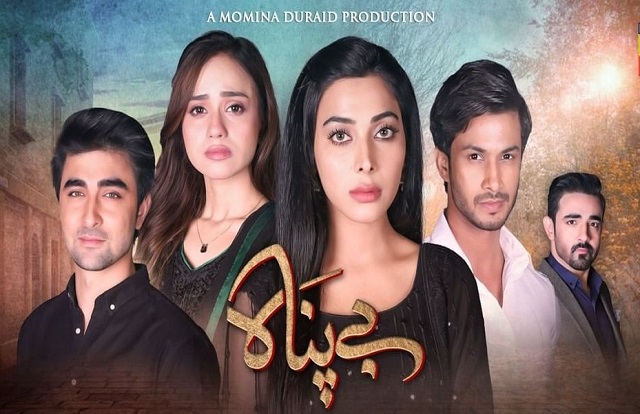 Gul and Rashna are two young girls in the center of the events in Bepanah. Eshal Fayyaz and Kanwal Khan portray the drama’s main characters. Eshal Fayyaz’s Rashna is free-spirited and self-centered, while Kanwal Khan’s Gul is reserved and sympathetic. A seemingly insignificant act on Rishna’s part has devastating consequences for his loved ones.

At Karachi Fashion Week in 2011, Eshal Fayyaz made her debut as a replacement model. With Montage Fashion Show 2011, she walked the runway once more. As a brand ambassador, she has represented big companies such as Hira Lari Lawn and the 7th Expo Pakistan. Her notable acting projects count the drama serials Bebasi and Pehchaan.

In the Bepanah drama story, Eshal is seen as Rushna, a lively yet self-loving person.

Khaqan Shahnawaz is a rising star in the Pakistani entertainment industry. He is also a content producer, model, and lawyer. He also has a large following on social media platforms. On YouTube and Instagram, he uploads his collection of humorous videos uploads. Khaqan Shahnawaz made his acting debut in the drama series Bepanah.

Although he celebrates his birthday on 17th November, Khaqan has not revealed his exact age. In addition, the young lad is still single.

In the Bepanah drama story, Khaqan portrays the lead role of Naufil.

Actor, model, director, and producer Raeed Muhammad Alam was born in Pakistan. His professional life began in 2010 with him doing some modeling. For seven years, he served as director Saqib Malik’s assistant. Additionally, he has directed two music videos, one for the Persian vocalist Shadi G and another for the band Teri Yaad. After working for several studios, he decided to go alone in 2018 and founded DNA Films. His latest dramas are Siyani, Inaam-e-Mohabbat, and Dil Awaiz.

In Bepanah drama story, Raeed Muhammad Alam has taken the character of Jibran.

Kanwal Khan is a well-known Pakistani actress who rose to fame after portraying Shehzeen in the hit drama series Wafa Be Mol. She is a celebrity on the rise, and she is making every effort to rise to the top. She has been in many television commercials in addition to dramas. Her most popular TV serials include Fitoor, Angna, and Guddu.

Kanwal was born in Karachi on 7th October 1998. She turned 24 in the year 2022. The young actress is currently single and has no marriage plans in the near future.

In the Bepanah drama story, Kanwal portrays the role of a sophisticated girl, Gul.