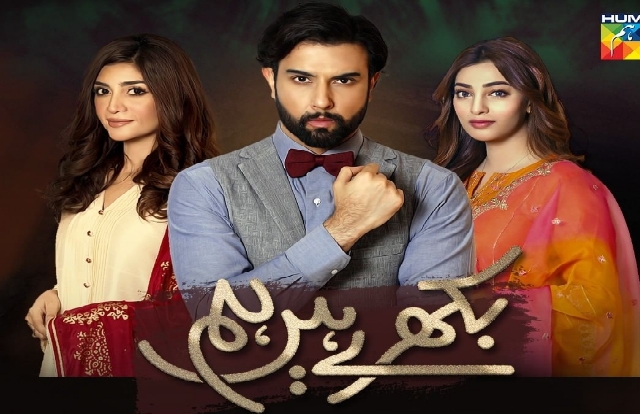 Sana Zafar writes the Bikhray Hain Hum drama story. Moomal Shunaid produces this project under the banner of Moomal Entertainment. On the other hand, Nair Maniar directed the shoot of the drama series.

You can watch the drama Bikhray Hain Hum on Wednesday & Thursday at 9:00 pm on HUM TV.

The story of Bikhray Hain Hum drama revolves around four main characters Sarim, Roomi, Tabish, and Sehrish. This tale is all about love, romance, revenge, and helplessness. Roomi and Tabish are university fellows and like each other. However, Omer wants to be financially independent before their wedding. On the other hand, Roomi is pressured by her mother to get married soon.

Sehrish is a jealous girl who can’t bear anyone above hr. Whereas, Sarim is a successful businessman. It will be exciting to see their characters as they will expose on TV.

Noor Hassan Rizvi is a Pakistani model, actor, and director. Before becoming an actor, he walked the runway for Pakistani designers and starred in TV commercials for domestic and foreign businesses. Ahl-e-Wafa, Benaam, and Sila-e-Mohabbat include in his famous drama list. Recently, Noor Hassan Rizvi was seen in the drama serial Yeh Na Thi Hamari Qismat aired on

In the Bikhray Hain Hum drama story, Noor portrays the role of Sarim.

Pakistani actress and model Nawal Saeed started her acting career in 2017. Th drama serial Yaqeen Ka Safar is her debut project that was a massive hit. Later on, she became part of high TRP dramas like Maamlat, Banno, and Sitam. Recently, Nawal was seen in the drama serial Dil-e-Veeran aired on ARY Digital.

According to her birth date, 30 October 1998, Nawal is 23 years old and currently single.

In the Bikhray Hain Hum drama story, Nawal will be seen in the lead role of Roomi, a lovely, kind, and ambitious girl.

One of Pakistan’s most prominent models and performers, Omer Shahzad, launched his career in 2011. He has since been nominated for several awards. His dramas Hum Tum and Mere Humsafar were massive hits. Currently, his drama Wo Pagal Si is on air on ARY Digital.

In the Bikhray Hain Hum drama story, Omer has taken the role of Tabish, who is in love with roomi.

Pakistani model and TV actress Zoya Nasir debuted her acting career in 2019. She has a YouTube account where she posts videos about makeup and fashion. Her famous dramas are Mere Apne, Dobaara, and Mere Humsafar. In 2022, she was seen in Badzaat and Chaudhary and Sons drama serials.

Born on 15 October 1990, Zoya will turn 32 in 2022. Zoya was engaged to Chris Betzmann in2021; however, she called off her engagement due to Chris’s disrespecting behaviour towards Islam.

In the Bikhray Hain Hum drama story, Zoya has taken the character of Sehrish, a rich, proud and mannerless girl.