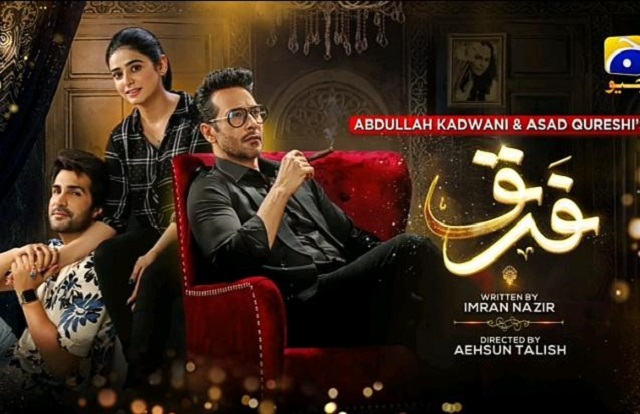 The Farq drama story comes from the pen of Imran Nazir. On the other hand, Abdullah Kadwani and Asad Qureshi have produced the drama serial Farq under the banner of 7th Sky Entertainment. At the same time, Aehsun Talish has amazingly directed the whole storyline.

They enter into a strange relationship amidst difficult circumstances. Kamal prefers to spend his time alone, while Irsa dreams of a lavish lifestyle. If they can’t figure out who they are and what they want out of life while they’re together, how will they ever be together?

The Farq drama serial will be a roller coaster ride of emotions and entertainment.

The Pakistani actor, producer, and TV host Faisal Qureshi doesn’t need any introduction. He is one of Pakistan’s highest-paid actors and has starred in various television dramas, reality shows, and films. He has won over 20 awards on a national level. He dived into acting as a child star in the early 90s. Although he is a giant in the showbiz industry, his notable work achievements mark Muqqadar, Log Kya Kahenge, and Fitoor. Recently, Faisla appeared on a mini screen in the drama serial Dil-e-Momin.

In the FArq drama story, Faisal Qureshi plays the role of a wealthy person, Kamal Hassan. He is a widower but still misses his wife. Kamal Hassan has a teenage daughter as well.

Sehar Khan, an actress and model, is stunning and remarkably gifted for her age. She is quickly becoming one of Pakistan’s most popular celebrities. The actress’s busy career spans television commercials, fashion shows, and dramatic roles in Pakistan. In 2017, she made her debut in the theatre world. Her acting skills could be seen in the drama serials Mein Agar Chup Hoon, Rang Mahal, and Fasiq. Sehar’s most recent drama Zakham was aired on GEO TV.

In the Farq drama serial, Sehar is seen as Irsa, a young materialistic girl. His father, Arif, is the driver of Kamal Hassan. She will lie about her status in university and wants to settle with a rich guy. Later on, fate makes her marry Kamal Hassan.