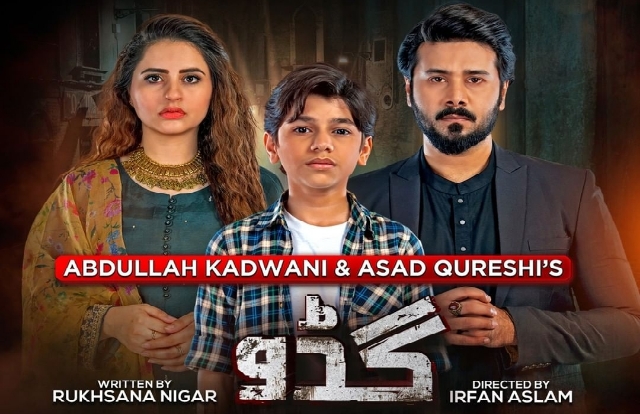 The drama serial Guddu will be released on 18 August 2022 only on GEO TV. The storyline of the drama serial Guddu portrays hardships and pain that the child of a broken family faces. Also, the Guddu drama cast includes popular faces of the showbiz industry. Ali Abbas, Fatima Effendi, Falak Shahzad, and Sohail Sameer play the lead roles.

The Guddu drama story came from the pen of Rukhsana Nigar. On the other hand, Irfan Aslam directed the Guddu drama shoot. Moreover, Abdullah Kadwani and Asad Qureshi produced this drama under the banner of 7th Sky Entertainment.

The story of the drama serial Guddu revolves around the lives of three characters and mainly the child, Guddu. He enjoys life with his parents. However, they will get separated due to some misunderstandings. After the divorce, her mother will marry another man with a daughter. Nevertheless, he will refuse to take Gudu with them.

After being rejected by his stepfather and stepmother, he leaves the house and is caught up in a beggar’s gang. His father and mother keep searching for their son while struggling with their life challenges.

Ali Abbas is a Pakistani drama and film actor. He graduated from law school and worked in a law office before becoming a TV producer and actor. His father, actor Waseem Abbas, opposed him being an actor; therefore, he worked hard while attempting not to capitalize on his name. There is a long list of his hit dramas, including Dour, Wafa Be Mol, and Mere Apne. Recently, Ali was seen in the drama serial Badzaat.

In 2012, Ali Abbas tied the knot with Hamna Ali. They are the proud parents of two beautiful children: Raeesa Ali and Salaar Ali.

In the Guddu drama story, Ali Abbas plays the role of Guddu’s father.

Fatima Effendi is a PakistaniHer mom, Fouzia Mushtaq, is also an actress. In 2001, she started her acting career at the young age of 11. Her best-ever dramas are Munafiq and Main Agar Chup Hoon. Recently, she played the lead role in the drama serial Bechari Qudsia.

In the drama serial Guddu, Fatima portrays the character of Guddu’s mother.

Pakistan’s rising young talent, Falak Shahzad. He currently has roles in both dramatic and commercial advertising. He may be young, but he already has a wealth of talent. They cast him in most Pakistani dramas as a kid. Khushi, his older sister, is also a well-known kid performer. Mohabbat Tujhe Alvida and Mujhe Khuda Pay Yaqeen Hai are his well-known dramas. He was recently a part of the drama serial Badnaseeb.

In the Guddu drama story, Falak plays the lead role of Guddu.