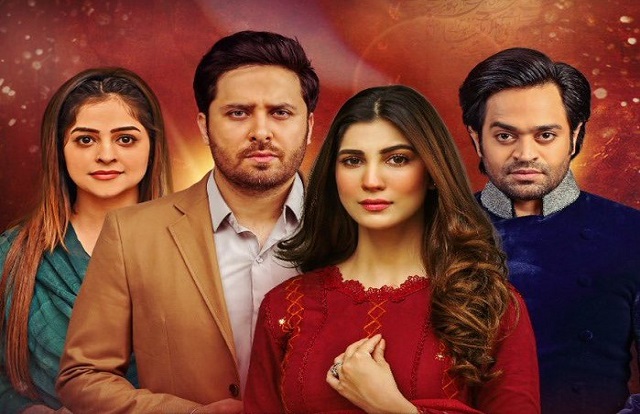 Inaam-e-Mohabbat drama is presented by GEO Entertainment and stars a star-studded cast, including big names in the industry. Indeed, the Inaam-e-Mohabbat drama cast includes Nazish Jahangir, Sidra Niazi, and Haroon Shahid in the lead roles. In fact, the drama serial is actually a love triangle with exciting and emotional twits.

Basically, the Inaam-e-Mohabbat drama script is written by Erum Wasi and Saima Wasi. On the other hand, Syed Mukhat Ahmed and Zeeshan M Khan have produced the drama under the banner of Golden Bridge Media. Meanwhile, Furqan Adam directed the drama serial Inaam-e-Mohabbat.

Moreover, Inaam-e-Mohabbat’s first episode will be released on 19 June 2022. Also, you can watch the new episode daily at 7:00 pm only on GEO TV. Also, to watch Inaam-e-Mohabbat drama online click here.

The dramatic story of Inaam-e-Mohabbat is a love triangle between Anaya, Mair, and Munizay. Munizay and Mair are friends, but Munizay wants to marry him. However, Mair chooses Anaya as her life partner. Therefore, this will trigger Munizay to take revenge on Anaya. In fact, Mair’s mother will also assist Munizay because she can not see a lower-class girl as her daughter-in-law.

Nazish Jahangir is a Pakistani actress who started as a theater player in 2015. Later on, she tried her luck on mini-screen in 2017. In fact, it proved a hit for her. Meanwhile, she was a part of famous dramas, including Kahin Deep Jaley, Dil Tanha Tanha, and Saraab. Moreover, her recent dramas are Ghamnadi and Berukhi.

In the Inaam-e-Mohabbat drama story, Anaya belongs to a lower-middle-class family, while her father is a driver. Later on, she will be married to Mair.

Sidra Niazi is a British Pakistani actress who started her acting career in 2021. Without a doubt, her debut drama was Qayamat on GEO TV. Afterward, she was seen in hit Pakistani dramas like Chupke Chupke, Makafaat Season 3, and Dikhawa Season 2. Indeed, her acting in the drama serials Badzaat and Dil Zaar Zaar was worth praising.

At the present time, Sidra is 32 years old and enjoying her bachelor’s life.

In the Inaam-e-Mohabbat drama story, Sidra will be markedly seen as the negative character of Munizay. In fact, Munizay likes Mair. However, Mair falls for Anaya, which makes Sidra jealous of her.

Haroon Shahid is a Pakistani actor and musician. He has been singing as well as writing songs for several years. However, he decided to jump into acting in 2017 in the movie Verna. Moreover, his drama debut was Tajdeed-e-Wafa in 2018. By the time he showcased his acting skills in drama serials Qayamat, Aakhir Kab Tak, and Amanat. Also, his recent dramas are Hum Kahan Ke Sachay Thay, Fasiq, and Ye Na Ti Hamari Qismat.

Moreover, 32 years old Haroon married Palwashy Shahid in 2011. In fact, he is the father of a daughter and a son.

In the Inaam-e-Mohabbat drama story, Mair comes from an elite family and contrarily marries Anaya. However, her mother will never accept this relationship.