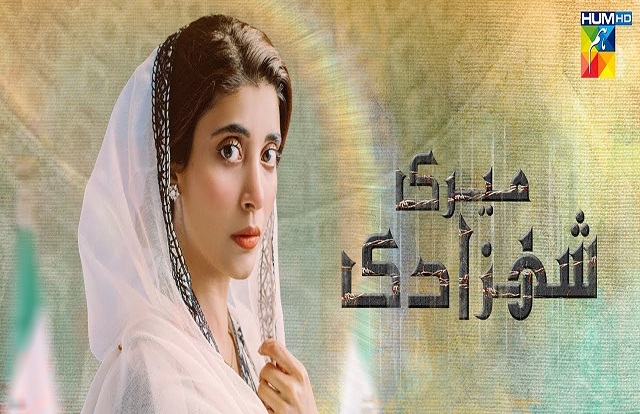 HUM TV has come up with a totally different storyline that is grabbing the audience’s attention. The drama serial Meri Shehzadi is now on air on the channel. Meri Shehzadi drama cast features Urwa Hocane and Ali Rehman Khan in the lead roles. On the other hand, Qavi Khan, Shamim Hilaly, Shabbir Jan, Atiqa Odho, and Sonia Mishal will be playing the main supporting roles.

The drama serial Meri Shehzadi comes straight from the pen of Zanjabeel Asim Shah. In addition to this, Momina Duraid is the producer of the drama under the banner of Momina Duraid Productions. At the same time, Qasim Ali Mureed directed the shoot of the Meri Shehzadi drama.

The first episode of this drama will be aired on 22 September 2022. Click here to watch Meri Shehzadi drama online episodes.

The drama serial Meri Shezadi is based on the story of an orphan girl and a spoiled boy of a rich political family. Dania and Shehroze are the main characters of the story. Dania is an orphan and lives with her maternal grandparents. His grandfather is especially concerned about Dania and wants her to live a happy and contented life.

Also, Dania just wishes for a loyal life partner whom she can love. Later on, she will be married to his uncle’s son, Shahroz. Shahroze comes from a political background and is an expert in double roles. He will marry Dania just to create a soft image in front of the media. Nonetheless, he is already married to another woman with whom he has a son.

It will interesting to watch how this story will take turn and Dania finds the best reward.

Pakistani actress, model, and media personality UrwaTul Wusqua Hussain is also known by her showbiz name Urwa Hocane. In 2012, she made her acting debut in the role of Rukhsana on Khushboo Ka Ghar. She is specifically famous for her outstanding roles in the drama serials Neeli Zinda Hai, Parizaad, and Amanat. She was recently seen in the drama serial Badzaat which was aired on GEO TV.

Born on 2 July 1991, Urwa turned 31 in 2022. She tied the knot with Pakistani singer and actor Farhan Saeed in 2016. Recently rumors were circulating about their divorce, however, the couple has sorted things out.

In the drama serial Meri Shehzadi. Urwa is playing the lead female role of Dania. Dania is an orphan and lives with her maternal grandparents.

The Pakistani actor and model Ali Rehman Khan has appeared in numerous Urdu shows on cinema, TV, and stage. Khan has also been nominated for two Lux Style Awards and has won two Hum Awards for his performance. Sinf-e-Aahan, Bebasi, and Laapata are some of his best-known projects so far. Recently he appeared in the blockbuster serial Badshah Begum.

Born on 6 May 1988, the 34 years old is currently single and not in any relationship.

In the drama serial Meri Shehzadi, Ali Rehman portrays the role of Shehroz who belongs to a political family. His family is noble in front of the media however all of them have a dual face.