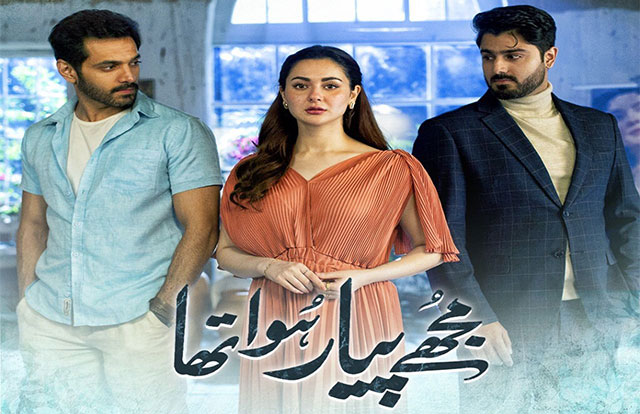 Sidra Sehar Imran has penned down the story of Mujhe Pyar Hua Tha drama. On the other hand, Dr Ali Kazmi and Fahad Mustafa have produced this project under the banner of Big Bang Entertainment. At the same time, Badar Mehmood directed the shoot of the drama serial Mujhe Pyar Hua Tha.

Hania as Maheer, Wahaj Ali as Saad, and Zaviyar Noman as Zaid are set to have a passionate, love-filled narrative (Areeb). The character of Wahaj is that of an artist who would do everything for his Hania. Zaviyar, on the other hand, experiences the same love at first sight during a family gathering.

Mujhe Pyaar Hua Tha Maheer, Saad, and Areeb are in a love triangle. Saad has always had feelings for his cousin Maheer, but his life takes an unexpected turn when he doesn’t tell her. This is when Areeb enters the picture. Things start to fall apart, and trust between the couple is broken due to a minor misunderstanding. Saad cares deeply for Maheer and would give up anything, including his dignity, to be with her. Maheer’s father, portrayed by Shahood Alvi, is Azhar, keen on his daughter marrying his nephew, Saad. Azhar is a private corporate employee and a very straightforward individual who values honor over material wealth. The satisfaction and happiness of his daughter are very important to him.

26 years old actress and model Hania Aamir started her acting career in 2016. Since then, she has given blockbuster performances, including Titli and Mere Humsafar. She recently played a pivotal role in Sang-e-Mah. Hania was lately in a relationship with the Pakistani singer Asim Azhar; however, they parted ways silently. The pretty fairy, Hania, is currently unmarried and in no relationship.

Wahaj Ali is a Pakistani actor and producer who tried his luck in the showbiz industry in 2015. He is famous for his exceptional acting skills in Ishq Jalebi, Ghisi Piti Mohabbat, Fitoor, and Dil Na Umeed Toh Nahi. Wahaj’s drama serial “Jo Bichar Gaye” is currently airing on HUM TV every Monday at 8:00 PM.

In the Mujhe Pyar Hua Tha drama story, Wahaj plays the role of Saad. He is Maheer’s cousin and wants to marry her.

Zaviyar’s good looks and charming demeanor lead many to believe he is taken. However, at age 27, he is currently single.

In the Mujhe Pyar Hua Tha drama story, Zaviyar is cast as Areeb, a well-settled man who falls in first-sight love with Maheer.