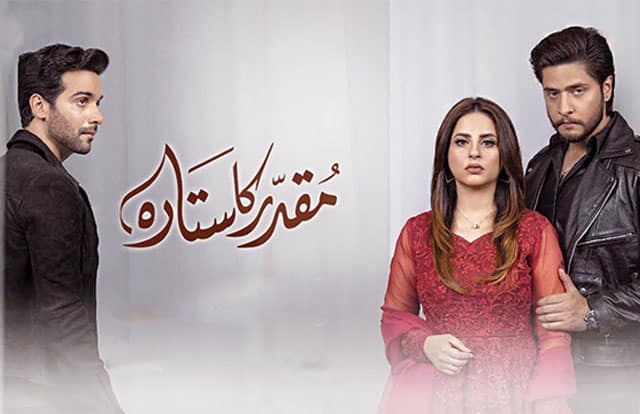 ARY Digital presents the drama serial Muqaddar Ka Sitara which will be coming to your screens on December 19, 2022. This drama depicts the tale of a spoiled, wealthy guy and an obedient young girl. Fatima Effendi, Arez Ahmad, and Inayat Khan are in the lead roles. In addition, Babar Ali, Nadia Hussain, Salma Hasan, Khwaja Shajeer Uddin, Rimha Ahmad, Laiba Khan, Shaista Jabeen, and Tania Hussain are also included in the cast.

Sadia Akhtar is the writer of the drama serial Muqaddar Ka Sitara. On the contrary, Abdullah Seja has produced this project under the banner of iDream Entertainment. At the same time, Saqib Zafar directed the shoot of the Muqaddar Ka Sitara drama series.

Click here to watch all online episodes of the Muqaddar Ka Sitara drama.

Arranged marriage is shown to be ha\rmful in the Muqaddar Ka Sitara drama. Moreover, it focuses on the lives of young women. In reality, parents of spoiled young men sometimes expect their child’s behavior to improve after marriage. However, they are often disappointed.

In the drama, a successful Pakistani American businessman, Safdar, moves to Pakistan. His pampered son Faizan is a burden on the family. Faizan is disobedient to his father. He also engages in various wrongdoing.

On the other hand, Hadiya is the eldest daughter of the family. She is entirely submissive to her parents. She is an educator at her dad’s school. Safdar wants Faizan to marry a good girl to improve his character.

However, you must watch the events unfold. Let’s find out if this phenomenon holds water or worsens things.

Fatima Effendi is a Pakistani actress and model. She entered the showbiz industry in 2001. Her notable acting projects count the drama serial Munafiq, Mein Agar Chup Hoon, Bechari Qudsia, and Guddu. Recently, she was also seen in the drama Betiyaan.

Born on December 12, 1992, Fatima turned 30 in 2022. In 2012, she finally married the Pakistani actor Kanwar Arsalan. Currently, the couple is blessed with two cute boys. They are named Almir and Mahbir.

In the Muqaddar Ka Sitara drama story, Fatime plays the lead role of Hadia, an innocent but obedient girl.

Arez Ahmad is a Pakistani model and actor. The 2016 drama Maikay Ki Yaad Na Aaye was his first role. He was also involved in the theater at university. Arez rose to fame with his outstanding acting skills in Mohabbat Dagh Ki Soorat, Wafa Be Mol, Mere Apne, and Aitebaar. His recent drama was Roag on HUM TV.

In the Muqaddar Ka Sitara drama story, Arez is the antagonist of the serial Faizan.

Inayat Khan is a Pakistani actor, model, as well as a dancer. He is also well-recognized for his notable supporting role in the Dil Lagi drama. As a matter of fact, his charm and extraordinary talent have paved the way in the entertainment industry. Recently, he was a part of the drama serial Resham Galli Ki Husna.

According to his birthdate, Inayat actually turned 32 years old in 2022. Nonetheless, the young lad is currently unmarried.

In the Muqaddar Ka Sitara drama story, Inayat portrays the role of Razi opposite Fatima Effendi.