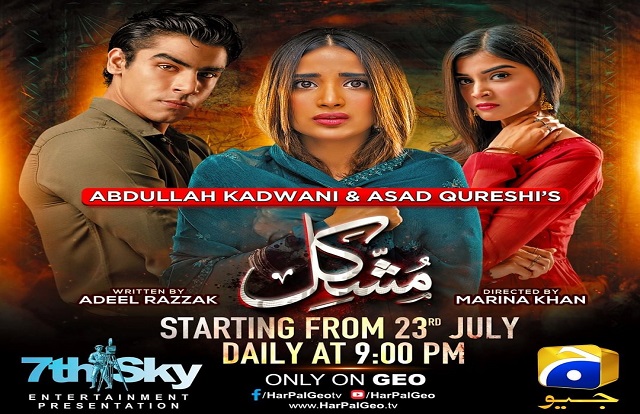 Adeel Razzak penned down the Mushkil drama story. On the other hand, Marina Khan directed the shoot. Also, Abdullah Kadwani and Asad Qureshi have produced this project through 7th Sky Entertainment.

This story revolves around four characters Sameen, Faraz, Hareem, and Hassan. Hareem likes Faraz, and they are university fellows. However, Faraz doesn’t have any interest in her. Later on, Hareem will ask his friend Sameen to arrange a meeting with Faraz and tell him about my feelings. Unfortunately, Sameen and Farz will be arrested by police, mistaken as someone else.

Meanwhile, the media shares their images, and they have to marry to save their parents’ reputation. Nevertheless, their relationship is not a happy one. After that, Hareem will take Sameen as her enemy. She will marry Faraz’s elder brother Hassan. She will make sure to degrade Sameen in others’ eyes with all her effort.

In the end, Sameen will manage to win the game with her innocence, love, and truthfulness.

Saboor Ali is a well-known Pakistani actress. She entered the showbiz industry in 2011. Her first drama was Mehmoodabad Ki Malkain, where she played the role of Rimsha. Saboor is the younger sister of superstar, Sajal Ali. In fact, she has been a part of all-time hit dramas like Mujhe Vida Kar, Parizaad, and Amanat. She was recently seen in the serial Nehar.

Born on 3rd March 1995, Saboor celebrated her 27th birthday in 2022. She is married to Pakistani TV actor Ali Ansari.

In the Mushkil drama story, Saboor, aka Sameen is the optimistic protagonist who will be in an unfortunate rmarriage. However, she will manage to do the things okay with her efforts.

Khushhal Khan is an emerging Pakistani actor who is known for his debut drama Qissa Meharbano Ka released in 2021. His recent drama is Bebasi on HUM TV.

In the Mushkil drama story, Khushhal is playing as Faraz opposite Saboor Ali (Sameen).

Popular among the masses, Zainab Shabbir, is a Pakistani actress who started her career in 2018. Her debut drama is Maa Sadqy. After that, she gave back to back hit dra,mas including Meray Apnay and Yaar Na Bichray. Also, her recent drama is Teri Raah Main on aired on ARY Digital.

Zainab is 24 years old holding a Bachelors degree. She is currently single.

In the Mushkil drama story, Zainab portrays the negative character, Hareem. It will be fun to see her as a negative protagonist.