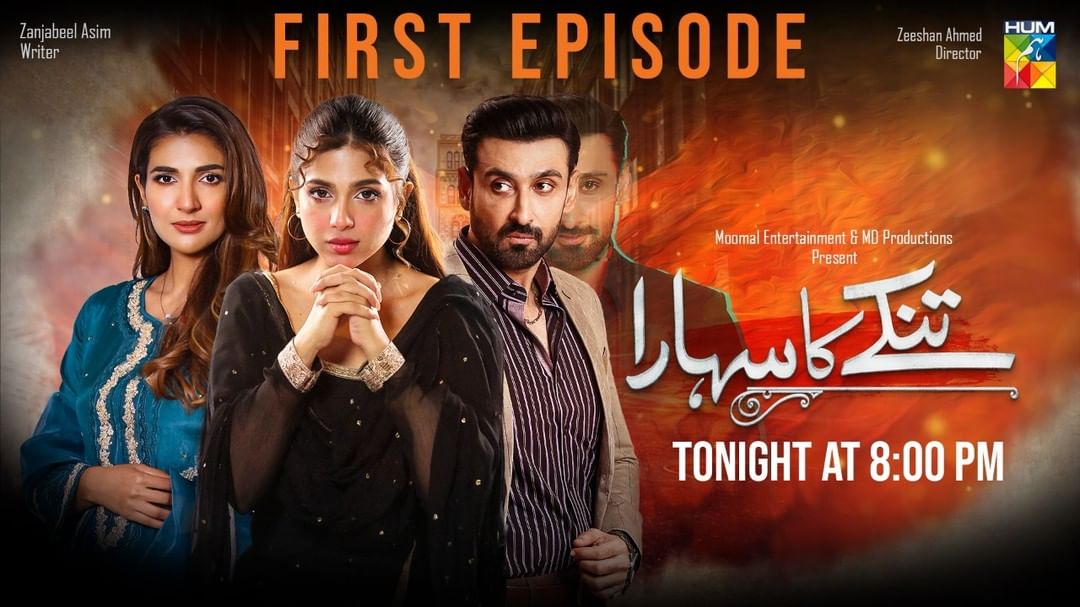 The story of the drama serial Tinkay Ka Sahara is written by the famous Zanjabeel Asim, On the other hand, the project is produced by the collaboration of Moomal Entertainment and Momina Duraid Productions. Also, Zeeshan Ahmed directed the shoot.

The drama’s story revolves around three main characters played by Sami, Rabab, and Soniya. Rabab wants to marry a rich man and finds out about Sami. Her father will inform her that Sami is notorious for his anger issues; however, she doesn’t want to consider it. Later on, she will repent for marrying Sami because he is a psycho and doesn’t trust his wife.

On the other hand, Saniya is an optimistic and compromising lady who will marry Haroon. Haroon doesn’t work at all; nevertheless, Soniya will change him and help him to establish his food business.

Pakistani-American model and actress Soniya Hussain Bukharee made her acting debut in the television series Dareecha in 2011. Since then, she’s been the lead in several television series, including Saraab, Mohabbat Tujhy Alvida, and Ishq Zahe Naseeb.

The 31 years young actress is currently unmarried and not in any relationship.

In the drama serial Tinkay Ka Sahara, Soniya will be seen in the lead role. She is an innocent, cheerful, and true lady.

Sami Khan is the stage name of Pakistani actor and model Mansoor Aslam Khan Niazi. In 2005, Sami Khan made his first appearance on TV in the drama series Dil Se Dil Tak. For the time being, his most notable works are Phaans, Mohlat, Mein Hari Piya, Mohabbat Daagh Ki Surat, and Dil Zaar Zaar. Recently, he was a part of the drama serial Pyar Deewangi Hai aired on GEO TV.

In 2009, Sami Khan wed Shanzy Khan. In addition, Mahnoor is the name of the couple’s daughter.

In the drama serial Tinkay Ka Sahara, Sami Khan portrays the role of a wealthy but disaffected man. He will marry and later oppress his wife.

Actress and talk show host Rabab Hashim hails from Pakistan. Her first project, Na Kaho Tum Mere Nahi, marked her entrance into the acting world. She attended and graduated with the highest honors from Pakistan’s National Academy of Performing Arts to hone her theatrical skills. Her famous dramas include Sila-e-Mohabbat and Qarar. Recently she was seen in the drama serial Angna.

In the drama serial Tinkay Ka Sahara, Rabab is playing as a girl who wants to marry a rich guy. However, once she is married to one, she will repent later due to his husband’s cruel nature.