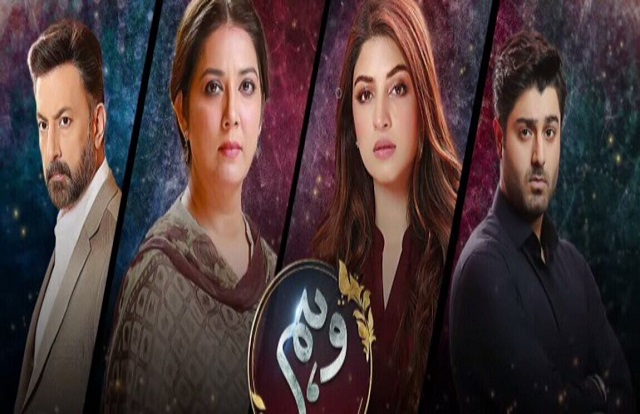 In fact, Imran Nazir has penned down the Weham drama story. At the same time, this drama is produced by Moomal Shunaid under the label of Moomal Entertainment. In addition to this, Adnan Wai Qureshi directed the drama serial Weham.

Moreover, the first episode of the Weham drama was released on 22 June 2022. Also, you can watch the new episode every Wednesday at 8:00 om only on HUM TV.

Weham’s drama story is going to be a roller coaster of emotions, romance, suspense, and hatred. Eshal and Junaid are the mail roles. They like each other and intend to marry soon. Moreover, it seems like Rukhsana will have some illusions in the story. She feels something that is unseen. In fact, she is self-sufficient but lonely. She appears to be kind and loving to others around her. However, the ruth is quite opposite to it. The story will go like this until Eshal will reveal the original situation to others. In this way, the people around Rukhsana will come to know about her true colors.

Kinza Hashmi is a Pakistani actress and model who started her acting career in 2014 in the drama serial Adhura Milan. Later on, she appeared in various commercials, telefilms, as well as music videos. Kinza gained popularity among audiences through the drama serials “Azmaish” and “Mohlat.” Recently, Kinza played the lead role in the drama serial Dil Awaiz.

Currently, the 25 years old Kinza is single and has no plans to marry soon.

In the Weham drama story, Kinza is playing the lead role of Eshal. Eshal is an optimistic girl who will be married to Junaid. Moreover, she will reveal the ill acts of the negative protagonist, Rukhsana.

Due to his handsome personality, people assume he must be taken. However, he is 27 years old and not in a relationship.

In the Weham drama story, Zaviyar portrays the character of Junaid who likes Eshal. Also, Junaid will support Eshal throughout the story.