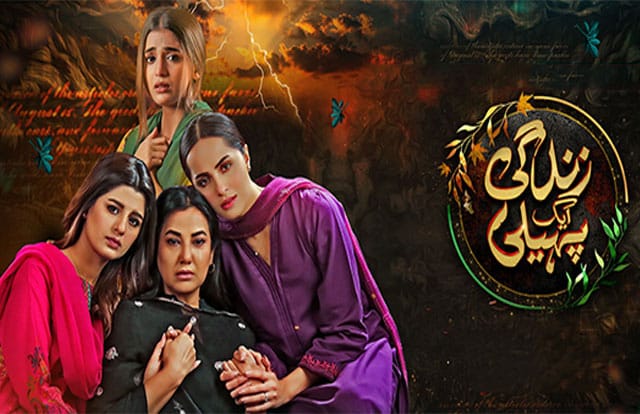 Dilawar Khan and Anila Syed have beautifully crafted the Zindagi Aik Paheli drama story. On the other hand, Abdulah Kadwani and Asad Qureshi produced the serial under the banner of 7th Sky Entertainment. Moreover, the talented Shahid Younas directed the shoot.

The story of the drama serial Zindagi Aik Paheli revolves around Mehnaz, Maliha, and Faiza, three sisters whose father suffers a devastating financial loss. The situation quickly deteriorates as Mehnaz is pressured to make concessions at every turn. Maliha realizes that the emotions at home are getting out of hand, and she must take action to protect her loved ones. Fahad, a kind young man, comes into her life as she tries to provide for her family by working multiple jobs.

Zindagi The three sisters at the center of Aik Paheli’s narrative are unflinching in the face of hardship. Will Mehnaz find solace and rest amidst her hardships, or will she have to keep fighting for love and respect? Can Maliha make things right for her loved ones?

Beautiful model and Pakistani actress Maria Malik hails from Pakistan. In 2016, she launched into a successful career as a model. At a later time, she tried her hand at acting, debuting in the play Adhi Gawahi. which was her first acting role, as the supporting Nageen. Her notable drama work include Mann-e-Iltija, Inteha-e-Ishq, and Bichoo.

In the drama story of Zindagi Aik Paheli, Maria plays the role of Maleha whose father passes through financial crises. She will stand strng for her family to provide with bread and butter.

In the drama story of Zindagi Aik Paheli, Nimra will be seen in the role of Mehnaz. After the financial crises in her family, she will find it hard to compromise on every little thing.